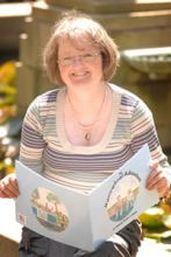 Melanie Winrow has a passion for writing that runs as deep as her need to breathe - it is inherent in her!  Recently she was asked if she had to give up everything except two things what would they be?  She replied, "I can live without anything except books and my writing.  I love reading and do it at every opportunity - if there is nothing to hand I will read the back of a cereal box!"  Laughingly, she adds, "You can learn a lot from them!"

Although she has always written as a hobby, it wasn't until 3 years ago that her efforts began to pay off.  She is pictured holding a copy of her first children's book which she wrote in 1997 - but this was not a fairytale story.  Things could have turned out very differently for her after she had a terrible accident which took her life in a new direction.

"I fell down the stairs in my house and broke my arm in 4 places.  After 4 months in plaster I had written my first novel (more about that at a later date) and was feeling blue.  By nature I'm not a miserable person so I decided to do something positive.  I logged onto the internet and registered with www.freelancewriters.com - it was free for a year so I had nothing to lose.  Two days later I got an email asking me to meet a publisher at a hotel near my home town (she travelled a long way to come and meet me) and she commissioned me to write a series of children's books based on her grandchildren James, Katie and Lewis. "

So where did she get her inspiration from?

"Well I'm very fortunate that I have a very good memory and also keep journals.  I began as I always do, reading through my journal to see if anything struck a chord.  While I was reading I was cast back to a walk my family and I did on boxing day many years ago.  My niece was in the pram, the snow was glistening on the ground and we decided to go down to the canal.  While we were walking we saw 2 geese chasing each other, the female leading the male a merry dance - each time he thought he'd caught up with her she would speed up.  It was very funny to watch.  We also saw a few Narrow Boats ... slowly an idea began to form in my mind.  A year later, the book was published and is available on the internet and all good book shops.  You can also get it from www.itsnotrocketscienceisit.com "

Since then she has written extensively, is a regular guest on the Jason Rosenberg show - www.thebiggestnews.com and is keen to return to one of her other main interests - interviewing celebrities.

"That came about by accident after I decided to interview my favourite actor of the time, Mike Holloway.  I was promised an interview and panicked because I realised I was very unprepared because I'd never done one in my life.  Basically I was just a fan trying to spend time with her favourite actor!   Unexpectedly I got an opportunity to interview one of the cast of Bread (Peter Byrne) who was incredibly kind and offered me invaluable advice.  He set me up with my second interviewee (Eileen Pollock who played Lilo Lil) and she set me up with my third - Charles West (writer and actor).  After that I was on my own which was scary - but to date I've done around 100 interviews.  My favourites include Sir Norman Wisdom, Dame Edna, Gilbert O'Sullivan and Brotherhood of Man.  In some cases I have remained in contact with the stars which is wonderful, but I am aware of what a precious gift that contact is so I would never betray their confidence in any way.  I will contact people for others but will never give contact details out."

Melanie has had a great deal of surgery on her arm and is determined not to let her problems stop her writing.  "Although it's painful, I do have techniques which help.  I have a special keyboard and also use voice recognition programs when the pain is too severe - I hate doing that though.  I do prefer to handwrite but unfortunately it was my right hand that was affected so I have to limit the time I spend doing that."

Keep an eye on Melanie's exciting blog where she will keep you informed of how things pan out.

Paul, who was born in Pueblo, Colorado, is a prolific writer who can turn out a script in record time (A Face in the Clouds took just a month to write!)  Asked what his favourite project is, Paul is quick to answer.

"BAP The Amazing Car is an amazing concept.  He was ahead of his time but is now raring to go.  The feedback we have had indicates that the children love the character so we are excited at the prospect of bringing him to the big screen and into the book market too.  The merchandise alone is incredible - we can't keep it on the shelves."  He is very proud of this project and adds, "BAP is very special because he has a childike innocence about him and it is this which makes him unique.  All he wants to do is help others and, no matter what, he always tries to see the good in other people.  The book has educational value too and, importantly, it is a book written FOR children, with ideas BY children.  Many of those who have seen the book have asked for BAP to change into some other vehicles (some very challenging ones too) and he has willingly obliged.

Paul is definitely a rising star of the 21st century and is tipped by many to be the next Roald Dahl, a fact that delights him because he grew up with many of Roald's children's stories - Charlie and the Chocolate Factory remains one of his favourites to this day!

At 40, Paul is an extremely versatile young writer who is capable of turning his hand to almost any type of writing imaginable - everything from children's books to a blockbuster movie which is currently in the pipeline.

But writing isn't his only talent - he is also a brilliant actor, a fact born out by the list of credits he has to his name.  He has starred in The Bill, Bust (with Paul Nicholas), Crimewatch (twice), Brookside and Chariots of Fire to name just a few - this is without mentioning his impressive list of theatre credits!  For some time now, he has concentrated on his writing, but when I recently caught up with him he told me, "There's a lot of very exciting news as far as my acting goes.  I am appearing in two American films - I'm going to America to film the first one in September - and I have also been offered a lead role in another film - more news of that will follow when the details are finalised.  I'm very excited to be a part of it all."

Paul will be updating his blog on a regular basis - look out for exclusive details of his writing and acting achievements here.

Paul was far too busy filming in America to be able to blog about his experiences.  The filming went extremely well and was completed on time.  The set was a real horror house which is deliberately built during September and taken down again after Haloween so filming was on a VERY tight schedule.  He says he takes his hat off to the make up artists and the producer for all the hard and amazing work they put in.  The set was so well done that it was actually a house and you could roam anywhere - at your own risk :-)  He is hoping to go back in March next year to work on another film by the same producer!  All information will be revealed when we are permitted to do so.  Pictures will be added to this site to give you a feel for the film.